Welcome to Thessaloniki! IBMT Tours representative will meet and assist you upon arrival.  At 6 pm, meet your Tour Director and traveling companions, then enjoy a welcome dinner at your hotel to celebrate the start of your upcoming spiritual journey. Buffet Dinner at hotel. Overnight Thessaloniki. (D)

Breakfast and trip to Philippi, the town where Paul delivered his first sermon in Europe, sowing the seeds of Christianity. “And from there (He went) to Philippi, which is the leading city of the district of Macedonia and a Roman Colony. We remained in this city some days…” (Acts 16:11-12). Paul arrived here with Silas and Luke on the winter of AD 49 to AD50. There the first Christian baptism was performed, of a woman named Lydia. Although they were prosecuted and arrested, they received God’s help to escape from prison (Acts 16: 25-26) where there was the conversion of the jailer (Acts 16: 31). We will visit the Roman Theatre, probable site of the prison where Paul and Silas were arrested. We will continue towards the city of Kavala, the ancient city of Neapolis (Acts 16:11) where Paul landed with his disciples, Timothy and Silas. It was later renamed Christoupolis, meaning city of Christ, because it was the first European city to accept Christianity. We will visit the Roman Aqueduct and the ruins of the Acropolis. Enjoy dinner at local restaurant at famous area of Ladakika in Thessaloniki. Dinner - Restaurant at Ladadika 4 course dinner. Overnight Thessaloniki. (B,D)

After breakfast the trip continues with exploring the city of Thessalonica, where Paul preached the gospel in the second and third missionary journey. For the early Christians of this city he wrote epistles “To the Thessalonians.”. We will visit the Cathedral of St. Demetrius, the Protector Saint of the city, the Agora, the Church of Saint Sofia, the White Tower and the Byzantine fortress of the city, the triumphal Arch of Galerius starting at the Via Egnatia, once a strategic artery of the Roman Empire. Next stop will be Veria (Berea), another town evangelized by Paul (Acts 17: 10-14). When Saint Paul visited this town in AD50, he came across a more “noble” Jewish community where he preached and created an important Church. This is where Paul met Sopatros (or Sosipatros), who would later become a valuable comrade who followed him on his return journey to Asia. We will visit the ancient synagogue here we will see the Byzantine mosaic in the monument commemorating his preaching. Depart for Kalambaka for dinner and overnight. Buffet Dinner at hotel.
Overnight Kalambaka (B,D) 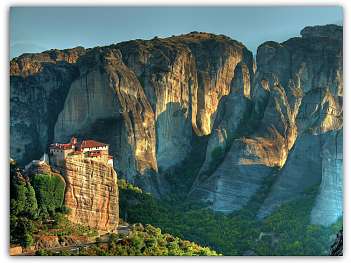 After breakfast the trip continues with a visit the spectacular Meteora, the UNESCO World Heritage Site, which is a mountainous region of stunning scenery. You will see hundred-year-old Byzantine monasteries on top of huge rocks, during the Middle Ages, first built in the 14th century by monks seeking isolation and salvation. We will visit the most famous of them, which is now a popular museum, the Great Meteoron, to admire superb icons, old manuscripts, unique mosaics and frescoes. Arrival Athens enjoy dinner at famous Kebab House – Aristos Kebab - unique dine experience. Dinner – Famous Aristos Kebab. Overnight Athens (B,D) 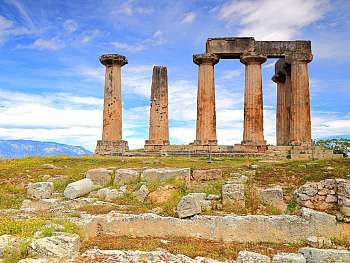 After breakfast we will head toward ancient Corinth (Acts 18.1-18). It was in ancient Corinth where Paul came and worked, established a thriving church and writing two of the epistles, which are now part of the New Testament. We will see all the sites that are associated with his ministry: The Agora, the Temple of Apollo, the roman Odeon, the Bema and Gallio’s seat, the pillars, stairs, and the place of public worship, where Paul preached. All these visits will certainly enhance the understanding of Corinthians I and II. Before ending the tour and return to Athens, we will pass by the ancient Greek port of Cenchrea (Acts 18:18) where Paul was during his second missionary journey and the ruin of the early Christian 5th Century basilica. Return to Athens, dinner to costal area of Athens for dinner at local restaurant with sea view – next to the sea Dinner-  Edem Restaurant with sea view at costal area of Athens - restaurant is located next to the sea on the beach. Overnight Athens. (B,D)

Awaken refreshed this morning and ready to begin your 3-night CRUISE around the Greek Isles and Turkey. Head first to mountainous Mykonos with its iconic windmills and brilliant whitewashed houses. Wander through the narrow winding streets, do a little shopping, or sit in a café to people-watch. Meals on board. Overnight on board. (B,L,D)

Visit the Turkish port of Kusadasi for an included excursion to the EPHESUS ARCHAEOLOGICAL SITE, the former capital of the Roman province of Asia. Walk in the footsteps of Apostle Paul, who lived and preached here, and meditate on what life must have been like for the early Ephesian Christians in this pagan society. Also, see the House of Mary, where the Virgin Mary is said to have spent her last days. Continue your cruise to the island of Patmos, the “Jerusalem of the Aegean,” and visit the MONASTERY OF ST. JOHN and the CAVE OF THE APOCALYPSE, where John the Evangelist received the visions that he recorded in the Book of the Revelation during his exile. Meals on board. Overnight on board. (B,L,D)

First port of call today is Heraklion on Crete. An included excursion takes you to nearby KNOSSOS, the center of the 3000 BC Minoan civilization and historic site of mythology’s tales about the Minotaur and the labyrinth. Afternoon call (weather permitting) at Santorini, the “Black Pearl of the Aegean.”  Today we will take a tour to the cliff-top village of Oia for one of the world’s most glorious panoramic views. Meals on board. Overnight on board. (B,L,D) 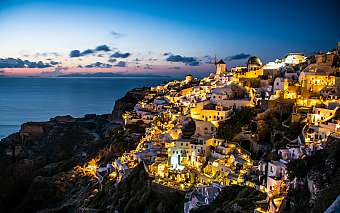 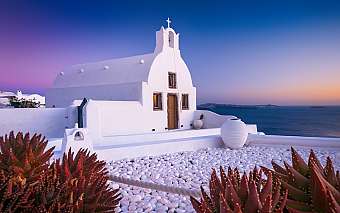 Disembark Return to Athens for sightseeing that visits the ACROPOLIS with the Parthenon and AREOPAGUS, where Paul delivered his famous sermon about the identity of the “Unknown God.”   Continue walking to Thisio   - Flee Market area   one of Athens’ most popular attractions. This jumble of antique shops and street vendors is a paradise for bargain-hunters and those with an eye for the unusual. Second-hand books, stamps, coins, collectables, accessories are just some of the items on offer.  Monastiraki Flea Market - counts as the most visited and scenic areas of Athens, for both Greeks and tourists; neighboring and connected to Plaka, the oldest section of the city; it is the easiest route to go up to the Acropolis. This lively area of shops, stalls and eateries is a dream come true for lovers of fun, food and fashion.  We will taste famous Greek souvlaki & Loukoumades with honey. Tonight, join your traveling companions for a final evening of fellowship and celebration at a farewell dinner at your hotel. Buffet Dinner at hotel. Overnight Athens. (B,D)

Your vacation ends with breakfast this morning and transfer to the Airport for the flight taking you home.

Extra options:
we can include in the program visit to the following sites
Vergina   - Tomb of King Phillip Alexanders the Great father
Acrocorinthos – Medieval fortress – Venus Temple (during visit to Ancient Corinthos)
Acropolis Museum – $35 per person for the three sites